Mahalo nui loa to the following sponsors:
We were very fortunate to have several researchers speak from the Breadfruit Institute of the National Tropical Botanical Garden and Hawai‘i Homegrown Food Network Ho‘oulu Ka ‘Ulu – Revitalizing Breadfruit in Hawai‘i.

Lectures included:
Diane Ragone – “All about ‘ulu and why it is good for you”
Craig Elevitch – “‘Ulu in Agroforestry”
Ian Cole – “‘Ulu from Root to Fruit” 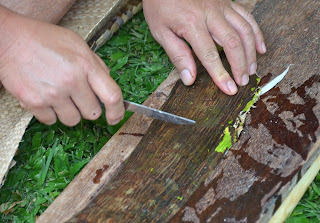 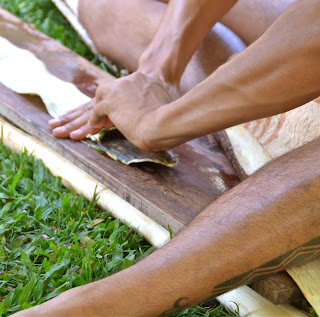 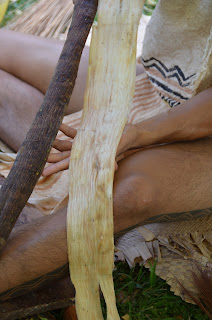 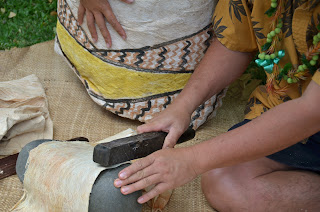 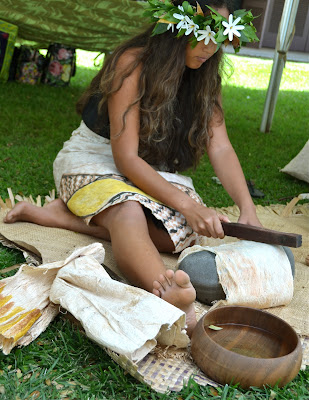 I’ve also included a little essay (that I handed out at the workshop) on breadfruit, or mei, along with a couple recipes (which I learned from good friends while spending time in the Marquesas, as well as incorporating breadfruit into modern recipes in Hawai‘i). But, what I’ve found, I enjoy ‘ulu “the simpler the better!” 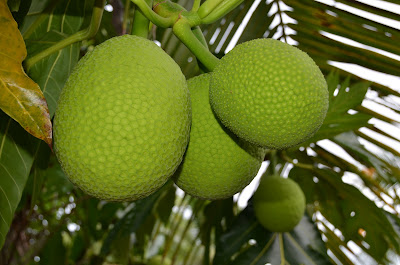 There are numerous traditional names for breadfruit (f. Moraceae, Artocarpus Altilis) found across most parts of Polynesia, as well as countless names for each variety and stage of growth. The most common are:


With the exception of colder climates such as Aotearoa (New Zealand) and Rapa Nui (Easter Island), most Polynesian cultures include breadfruit as part of their customary diets, but the Marquesas people (Te Henua ‘Enana, Te Fenua ‘Enata) established breadfruit, or mei, as one of their primary food sources. Overly-simplified, more than a thousand years ago the mata‘einana (maohi, maka‘ainana) of Te Henua ‘Enana were forced by environmental unpredictability (periodic drought causing famine), combined with an increase in population growth, to manage an agricultural system that included the long-term storage of ua ma, or fermented mei (ma) conserved in subterranean pits (ua).  During rainy periods, breadfruit trees can yield several harvests, thus providing a substantial storage resource. Tribal chiefs, or Haka‘iki, predominantly controlled mei production, particularly its distribution, which included ua ma. Many family and communal groups shared ua ma, with some ua constructed as large as 18-feet in diameter and 15 feet deep. Some ua ma are said to have existed for more than 100 years. The old ma resembles a thick, tacky, dark paste, and must be properly prepared before eating.

Popoi Ma, Popoi Mei
If using ma (fermented breadfruit), it must first be prepared by gradually adding water (or coconut water) and kneaded into soft dough. Mei‘a (bananas, Musa sp.) are sometimes added as well. The dough is shaped and wrapped into koumu (vahima, small cooking packets) usually made of fau (purau, hau, Hibiscus Tiliaceus), mei‘a, or auti  (ti, ki, Cordyline sp.) leaves and either baked in an umu (imu, traditional earth oven), modern oven, steamed, or boiled. It is finished cooking when there is no trace on a pick after inserting (as testing cake). 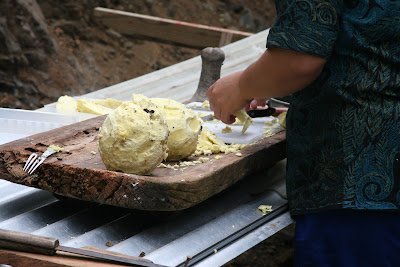 The cooked ma is then unwrapped and pounded with a kea tuki popoi (pounder) to the consistency of a smooth paste.  The paste is kneaded with freshly roasted breadfruit; amounts vary with taste and availability. Sometimes cooked ta‘o (taro, kalo, Colocasia Esculenta) is pounded into the paste as well (popoi ta‘o). Traditionally served with fresh grated, squeezed coconut milk. 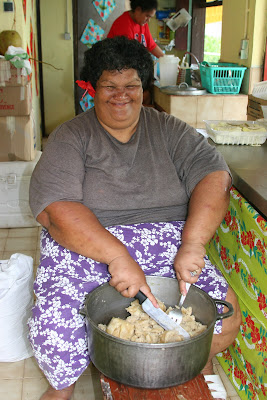 Ka‘aku (Ko‘ehi)
Fire-roasted breadfruit that has been peeled, cored, and pounded with coconut milk to your preferred consistency. 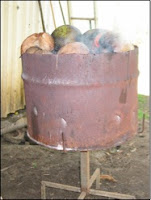 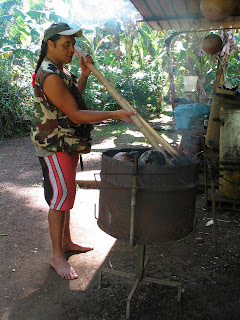 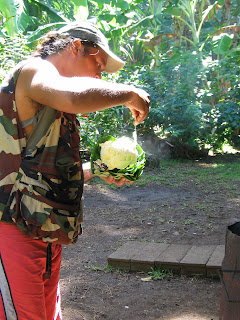 Feikai Mei Pa‘a
Fire-roast mei, or breadfruit (or ripen until soft by piercing a piece of fau (hau) or bamboo into the stem end). Peel, core, slice, and layer on top of banana and auti (ti, ki) leaves, occasionally lined within a coconut leaf basket, or sometimes a small hole in the ground that is first lined with fau leaves, crisscrossed with several auti, and then with heat-softened banana leaves (to make them pliable). Roasted or steamed ta‘o  (taro, kalo) is frequently sliced and placed on top. A blend of fresh coconut milk and honey is poured over the mei and ta‘o. Sometimes water and a little coconut meat is added. Seal with banana leaves and tie (as with Hawaiian Laulau). Traditionally, feikai mei pa‘a is baked in an umu (imu, earth oven). The prepared packets are sometimes strung along green, peeled sticks (fau) and hung over, not on, the hot stones of the umu before closing to bake. The sweet pudding caramelizes as it bakes for several hours. Today, feikai mei pa‘a is also baked “casserole-style” in modern ovens.

Mei Pa‘atai
Fire-roast mei (breadfruit). Split, core, and scoop out into bowl. Mash mei pieces into patties and heat on lightly oiled pan. Brown as desired and lightly sprinkle with traditional sea salt (pa‘atai) or a squeeze of citrus (such as lime).

Fresh roasted mei pa‘atai at home on our gas stove

Steamed or Baked Breadfruit
Numerous dishes
Steam:    Cut breadfruit in half or quarters and place in hot steamer basket until tender. Peel and core.

Bake:      375° oven
Place unpeeled breadfruit in baking pan, adding water to prevent burning
Bake about one hour until tender (as you would a potato)
Peel and core.
Or, split and core breadfruit prior to baking with seasonings placed in core cavity.
Season breadfruit as desired.

Use in favorite recipes.


Some simple suggestions after cooking:
·      Cut into small pieces and simply eat as substitute for bread with your meal,
·      Squeeze of lemon or lime, salt and pepper, sprinkling of chili-pepper water, drizzle of olive oil, or tomato sauce,
·      Cube into stir-fries or soups,
·      Puree with your favorite sweet such as jam, honey, or sugar and season to taste,
·      Puree/mash/pound (as a substitute for potatoes) with vegetable or chicken broth, or milk (or a touch of freshly squeezed coconut milk), season to your taste,
·      Marinate in a light-vinaigrette and add to salads or omelets,
·      Broil slices (lightly brushed with olive oil) in oven, or grill slices on the bbq, season to taste,
·      Lightly fry thin slices (or fried “chips”),
·      Puree with a bit of sweetness (your choice – fruit, jam) and milk to make a dessert,
·      Lightly drizzle with butter,
·      Even add on top pizza!
·      Be creative!

Breadfruit Beignets
Puree cooked breadfruit, about 2 cups (either roast, bake, steam, or boil, then peel and core).
Add mashed banana if desired.
Whisk together:
1 cup all-purpose flour
1 ½ teaspoons baking powder
¼ teaspoon salt
Mix until smooth:
2 egg yolks (save egg whites)
¾ cup milk
If desired: 1 tablespoon melted butter, or vegetable oil
Mix the dry mixture into the wet, and then add the pureed breadfruit, along with:
2 tablespoons sugar
1 teaspoon vanilla (extract, or freshly scraped from the inside of a vanilla bean)
If desired: 1 tablespoon of rum, or ½ teaspoon of spice (such as nutmeg, cinnamon, or allspice)
Mix together, adjust for dryness (should be a semi-thick batter), let rest for at least 1 hour.
Meanwhile, whip the saved egg whites to soft-stiff peaks (not dry) and fold into the pureed breadfruit mixture.
Cook spoonfuls of mixture in hot oil until golden brown.
Drain on towel and lightly sprinkle with powdered sugar (and cinnamon if desired).
May be prepared savory by omitting the sugar and vanilla, and served with tomato sauce or lemon/lime wedges.

Mahalo for visiting our little blog!